In this book, Lindley S. Butler traverses oft-noted but little understood events in the political and social establishment of the Carolina colony. In the wake of the English Civil Wars in the mid-seventeenth century, King Charles II granted charters to eight Lords Proprietors to establish civil structures, levy duties and taxes, and develop a vast tract of land along the southeastern Atlantic coast. Butler argues that unlike the New England theocracies and Chesapeake plantocracy, the isolated colonial settlements of the Albemarle—the cradle of today's North Carolina—saw their power originate neither in the authority of the church nor in wealth extracted through slave labor, but rather in institutions that emphasized political, legal, and religious freedom for white male landholders. Despite this distinct pattern of economic, legal, and religious development, however, the colony could not avoid conflict among the diverse assemblage of Indigenous, European, and African people living there, all of whom contributed to the future of the state and nation that took shape in subsequent years.

Butler provides the first comprehensive history of the proprietary era in North Carolina since the nineteenth century, offering a substantial and accessible reappraisal of this key historical period. 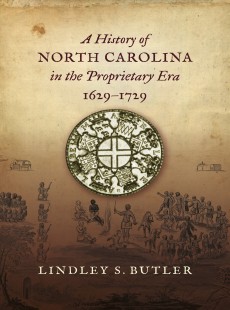