In this long-term community study of the freedom movement in rural, majority-black Claiborne County, Mississippi, Emilye Crosby explores the impact of the African American freedom struggle on small communities in general and questions common assumptions that are based on the national movement. The legal successes at the national level in the mid 1960s did not end the movement, Crosby contends, but rather emboldened people across the South to initiate waves of new actions around local issues.

Escalating assertiveness and demands of African Americans--including the reality of armed self-defense--were critical to ensuring meaningful local change to a remarkably resilient system of white supremacy. In Claiborne County, a highly effective boycott eventually led the Supreme Court to affirm the legality of economic boycotts for political protest. NAACP leader Charles Evers (brother of Medgar) managed to earn seemingly contradictory support from the national NAACP, the segregationist Sovereignty Commission, and white liberals. Studying both black activists and the white opposition, Crosby employs traditional sources and more than 100 oral histories to analyze the political and economic issues in the postmovement period, the impact of the movement and the resilience of white supremacy, and the ways these issues are closely connected to competing histories of the community. 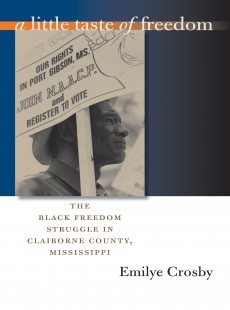 A Little Taste of Freedom