I would stand outside the mill fence mesmerized by the shadows of pumping Jacquard loom arms on the opaque windowpanes. I had found where I wanted to go. It looked like fun to me. It looked like magic. It didn't take long for that silly notion to be knocked out of my head. But, I persevered and, as the years passed, lint became my life."

This article appears in the Winter 2012 issue of Southern Cultures. The full issue is also available as an ebook. 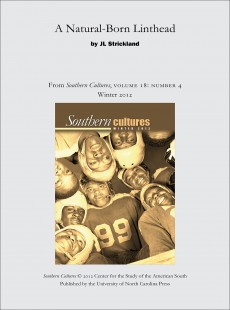