In 1891, thousands of Tennessee miners rose up against the use of convict labor by the state's coal companies, eventually engulfing five mountain communities in a rebellion against government authority. Propelled by the insurgent sensibilities of Populism and Gilded Age unionism, the miners initially sought to abolish the convict lease system through legal challenges and legislative lobbying. When nonviolent tactics failed to achieve reform, the predominantly white miners repeatedly seized control of the stockades and expelled the mostly black convicts from the mining districts. Insurrection hastened the demise of convict leasing in Tennessee, though at the cost of greatly weakening organized labor in the state's coal regions.
Exhaustively researched and vividly written, A New South Rebellion brings to life the hopes that rural southerners invested in industrialization and the political tensions that could result when their aspirations were not met. Karin Shapiro skillfully analyzes the place of convict labor in southern economic development, the contested meanings of citizenship in late-nineteenth-century America, the weaknesses of Populist-era reform politics, and the fluidity of race relations during the early years of Jim Crow. 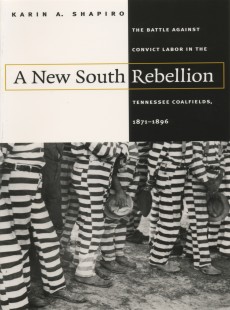 The Battle against Convict Labor in the Tennessee Coalfields, 1871-1896