Although Appomattox Court House is one of the most symbolically charged places in America, it was an ordinary tobacco-growing village both before and after an accident of fate brought the armies of Lee and Grant together there. It is that Appomattox--the typical small Confederate town--that William Marvel portrays in this deeply researched, compelling study. He tells the story of the Civil War from the perspective of one of the conflict's most famous sites.

The village sprang into existence just as Texas became a state and reached its peak not long before Lee and Grant met there. The postwar decline of the village mirrored that of the rural South as a whole, and Appomattox served as the focal point for Lost Cause myth-making.

Marvel draws on original documents, diaries, and letters composed as the war unfolded to produce a clear and credible portrait of everyday life in this town and the galvanizing events of April 1865. He also scrutinizes Appomattox the national symbol, exposing many of the cherished myths surrounding the surrender there. In particular, he challenges the fable that enemies who had battled each other for four years suddenly laid down their arms and welcomed each other as brothers. 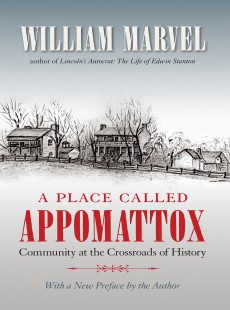