In 2012, Chicago's school year began with the city's first teachers' strike in a quarter century and ended with the largest mass closure of public schools in U.S. history. On one side, a union leader and veteran black woman educator drew upon organizing strategies from black and Latinx communities to demand increased school resources. On the other side, the mayor, backed by the Obama administration, argued that only corporate-style education reform could set the struggling school system aright. The stark differences in positions resonated nationally, challenging the long-standing alliance between teachers' unions and the Democratic Party.

Elizabeth Todd-Breland recovers the hidden history underlying this battle. She tells the story of black education reformers' community-based strategies to improve education beginning during the 1960s, as support for desegregation transformed into community control, experimental schooling models that pre-dated charter schools, and black teachers' challenges to a newly assertive teachers' union. This book reveals how these strategies collided with the burgeoning neoliberal educational apparatus during the late twentieth century, laying bare ruptures and enduring tensions between the politics of black achievement, urban inequality, and U.S. democracy. 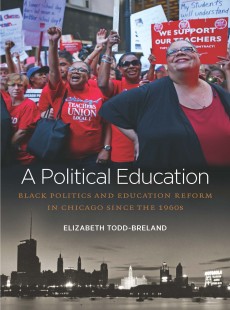 Black Politics and Education Reform in Chicago since the 1960s