The Army of the Potomac was a hotbed of political activity during the Civil War. As a source of dissent widely understood as a frustration for Abraham Lincoln, its onetime commander, George B. McClellan, even secured the Democratic nomination for president in 1864. But in this comprehensive reassessment of the army's politics, Zachery A. Fry argues that the war was an intense political education for its common soldiers. Fry examines several key crisis points to show how enlisted men developed political awareness that went beyond personal loyalties. By studying the struggle between Republicans and Democrats for political allegiance among the army's rank and file, Fry reveals how captains, majors, and colonels spurred a pro-Republican political awakening among the enlisted men, culminating in the army's resounding Republican voice in state and national elections in 1864.

For decades, historians have been content to view the Army of the Potomac primarily through the prism of its general officer corps, portraying it as an arm of the Democratic Party loyal to McClellan's leadership and legacy. Fry, in contrast, shifts the story's emphasis to resurrect the successful efforts of proadministration junior officers who educated their men on the war's political dynamics and laid the groundwork for Lincoln's victory in 1864. 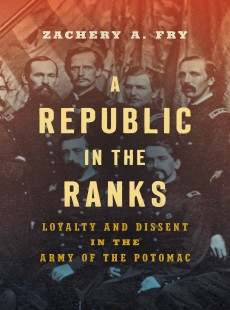 A Republic in the Ranks

Loyalty and Dissent in the Army of the Potomac