The development of the American nation has typically been interpreted in terms of its expansion through space, specifically its growth westward. In this innovative study, Thomas Allen posits time, not space, as the most significant territory of the young nation. He argues that beginning in the nineteenth century, the actual geography of the nation became less important, as Americans imagined the future as their true national territory.

Allen explores how transformations in the perception of time shaped American conceptions of democratic society and modern nationhood. He focuses on three ways of imagining time: the romantic historical time that prevailed at the outset of the nineteenth century, the geological "deep time" that arose as widely read scientific works displaced biblical chronology with a new scale of millions of years of natural history, and the technology-driven "clock time" that became central to American culture by century's end. Allen analyzes cultural artifacts ranging from clocks and scientific treatises to paintings and literary narratives to show how Americans made use of these diverse ideas about time to create competing visions of American nationhood. 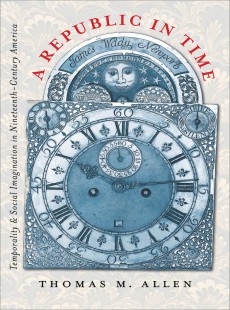 A Republic in Time