The civil rights movement was arguably the most successful social movement in American history. In a provocative new assessment of its success, David Chappell argues that the story of civil rights is not a story of the ultimate triumph of liberal ideas after decades of gradual progress. Rather, it is a story of the power of religious tradition.
Chappell reconsiders the intellectual roots of civil rights reform, showing how northern liberals' faith in the power of human reason to overcome prejudice was at odds with the movement's goal of immediate change. Even when liberals sincerely wanted change, they recognized that they could not necessarily inspire others to unite and fight for it. But the prophetic tradition of the Old Testament--sometimes translated into secular language--drove African American activists to unprecedented solidarity and self-sacrifice. Martin Luther King Jr., Fannie Lou Hamer, James Lawson, Modjeska Simkins, and other black leaders believed, as the Hebrew prophets believed, that they had to stand apart from society and instigate dramatic changes to force an unwilling world to abandon its sinful ways. Their impassioned campaign to stamp out "the sin of segregation" brought the vitality of a religious revival to their cause. Meanwhile, segregationists found little support within their white southern religious denominations. Although segregationists outvoted and outgunned black integrationists, the segregationists lost, Chappell concludes, largely because they did not have a religious commitment to their cause. 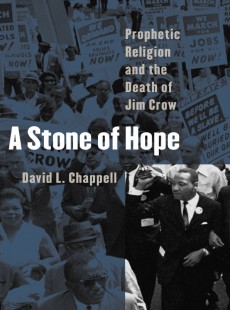 A Stone of Hope

Prophetic Religion and the Death of Jim Crow