The Civil War diaries of David Hunter Strother, known better to his contemporaries as "Porte Crayon," chronicle his three years of service in the Union army with the same cogency and eye for detail that made him one of the most popular writers and illustrators in America in his time. A Virginian strongly opposed to secession, Strother joined the Federal army as a civilian topographer in July of 1861 and was soon commissioned, rising eventually to the rank of brigadier general. He served under a succession of commanders, including Generals Patterson, Banks, Pope, and McClellan, winning their respect as well as their confidence. First published by UNC Press in 1961, A Virginia Yankee in the Civil War is a fascinating firsthand record of the conflict and of the divided loyalties it produced that is further enlivened by Strother's remarkable humor and insight. 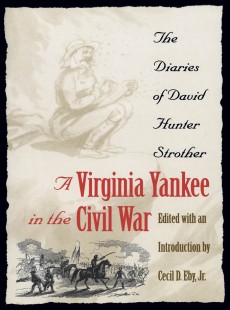 A Virginia Yankee in the Civil War

The Diaries of David Hunter Strother