By the mid-1950s, New York had been the unrivaled capital of America’s national pastime for a century, a place where baseball was followed with truly fanatical fervor. The city’s three teams—the New York Yankees, the New York Giants, and the Brooklyn Dodgers—had over the previous decade rewarded their fans’ devotion with stellar performances: from 1947 to 1957, one or more of these teams had played in the World Series every year but one. Yet on opening day 1958, the Giants and the Dodgers were gone. Their owners, Walter O’Malley and Horace Stoneham, had ripped them away from their longtime home and from the hearts of millions of devoted and passionate fans and taken the teams to California. How did it happen? Who was to blame? The relocation of the Giants and the Dodgers, an event that transcended sports and altered the landscape of New York City, has never been addressed with the depth, detail, and insight offered here by Robert E. Murphy. As informed as it is entertaining, After Many a Summer is rich in baseball lore, civic history, and the wheeling and dealing, alliances and betrayals, and sharp-elbowed machinations of big-city business and politics. 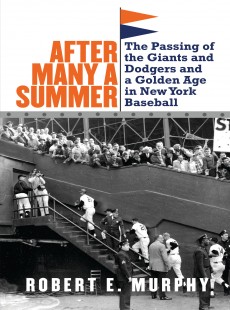 After Many a Summer