In this sweeping work, Elliott Young traces the pivotal century of Chinese migration to the Americas, beginning with the 1840s at the start of the "coolie" trade and ending during World War II. The Chinese came as laborers, streaming across borders legally and illegally and working jobs few others wanted, from constructing railroads in California to harvesting sugar cane in Cuba. Though nations were built in part from their labor, Young argues that they were the first group of migrants to bear the stigma of being "alien." Being neither black nor white and existing outside of the nineteenth century Western norms of sexuality and gender, the Chinese were viewed as permanent outsiders, culturally and legally. It was their presence that hastened the creation of immigration bureaucracies charged with capture, imprisonment, and deportation.

This book is the first transnational history of Chinese migration to the Americas. By focusing on the fluidity and complexity of border crossings throughout the Western Hemisphere, Young shows us how Chinese migrants constructed alternative communities and identities through these transnational pathways. 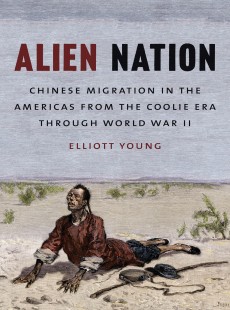