California during the gold rush was a place of disputed claims, shoot-outs, gambling halls, and prostitution; a place populated by that rough and rebellious figure, the forty-niner; in short, a place that seems utterly unconnected to middle-class culture. In American Alchemy, however, Brian Roberts offers a surprising challenge to this assumption.

Roberts points to a long-neglected truth of the gold rush: many of the northeastern forty-niners who ventured westward were in fact middle-class in origin, status, and values. Tracing the experiences and adventures both of these men and of the "unseen" forty-niners--women who stayed back East while their husbands went out West--he shows that, whatever else the gold seekers abandoned on the road to California, they did not simply turn their backs on middle-class culture.

Ultimately, Roberts argues, the story told here reveals an overlooked chapter in the history of the formation of the middle class. While the acquisition of respectability reflects one stage in this history, he says, the gold rush constitutes a second stage--a rebellion against standards of respectability. 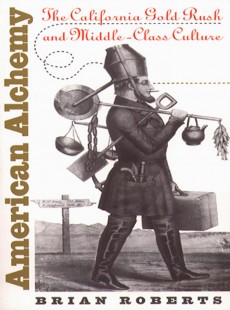