Compiled by a prominent abolitionist Theodore Dwight Weld, American Slavery As It Is combines information taken from witnesses, and from active and former slave owners, to generate a condemnation of slavery from both those who observed it and those who perpetuated it. The narrative describes the appalling day-to-day conditions of the over 2,700,000 men, women and children in slavery in the United States. Weld demonstrates how even prisoners--in the United States and in other countries--were significantly better fed than American slaves. Readers will find one of the most meticulous records of slave life available in this text. Unlike personal slave narratives, which focus on a single man or woman's experience, American Slavery details the overall conditions of slaves across multiple states and several years. 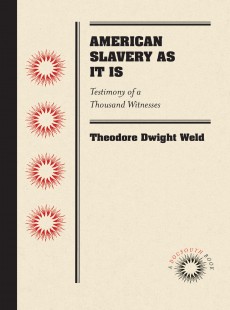 American Slavery As It Is

Testimony of a Thousand Witnesses