The familiar story of the Civil War tells of a predominately agricultural South pitted against a rapidly industrializing North. However, Adam Wesley Dean argues that the Republican Party's political ideology was fundamentally agrarian. Believing that small farms owned by families for generations led to a model society, Republicans supported a northern agricultural ideal in opposition to southern plantation agriculture, which destroyed the land's productivity, required constant western expansion, and produced an elite landed gentry hostile to the Union. Dean shows how agrarian republicanism shaped the debate over slavery's expansion, spurred the creation of the Department of Agriculture and the passage of the Homestead Act, and laid the foundation for the development of the earliest nature parks.

Spanning the long nineteenth century, Dean's study analyzes the changing debate over land development as it transitioned from focusing on the creation of a virtuous and orderly citizenry to being seen primarily as a "civilizing" mission. By showing Republicans as men and women with backgrounds in small farming, Dean unveils new connections between seemingly separate historical events, linking this era's views of natural and manmade environments with interpretations of slavery and land policy. 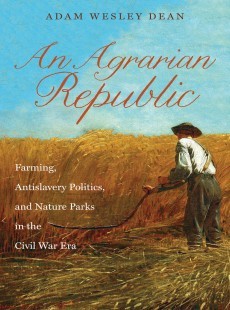