An Ordered Love is the first detailed study of sex roles in the utopian communities that proposed alternatives to monogamous marriage: The Shakers (1779-1890), the Mormons (1843-90), and the Oneida Community (1848-79).

The lives of men and women changed substantially when they joined one of the utopian communities. Louis J. Kern challenges the commonly held belief that Mormon polygamy was uniformly downgrading to women and that Oneida pantagamy and Shaker celibacy were liberating for them. Rather, Kern asserts that changes in sexual behavior and roles for women occurred in ideological environments that assumed women were inferior and needed male guidance. An elemental distrust of women denied the Victorian belief in their moral superiority, attacked the sanctity of the maternal role, and institutionalized the dominance of men over women.

These utopias accepted the revolutionary idea that the pleasure bond was the essence of marriage. They provided their members with a highly developed theological and ideological position that helped them cope with the ambiguities and anxieties they felt during a difficult transitional stage in social mores.

Analysis of the theological doctrines of these communities indicates how pervasive sexual questions were in the minds of the utopians and how closely they were related to both reform (social perfection) and salvation (individual perfection). These communities saw sex as the point at which the demands of individual selfishness and the social requirements of self-sacrifice were in most open conflict. They did not offer their members sexual license, but rather they established ideals of sexual orderliness and moral stability and sought to provide a refuge from the rampant sexual anxieties of Victorian culture.

Kern examines the critical importance of considerations of sexuality and sexual behavior in these communities, recognizing their value as indications of larger social and cultural tensions. Using the insights of history, psychology, and sociology, he investigates the relationships between the individual and society, ideology and behavior, and thought and action as expressed in the sexual life of these three communities. Previously unused manuscript sources on the Oneida Community and Shaker journals and daybooks reveal interesting and sometimes startling information on sexual behavior and attitudes. 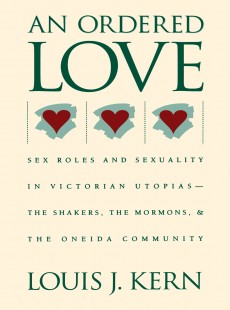 Sex Roles and Sexuality in Victorian Utopias--The Shakers, the Mormons, and the Oneida Community