Although conventionally treated as separate, America's four wars in Asia were actually phases in a sustained U.S. bid for regional dominance, according to Michael H. Hunt and Steven I. Levine. This effort unfolded as an imperial project in which military power and the imposition of America's political will were crucial. Devoting equal attention to Asian and American perspectives, the authors follow the long arc of conflict across seventy-five years from the Philippines through Japan and Korea to Vietnam, tracing along the way American ambition, ascendance, and ultimate defeat. They show how these wars are etched deeply in eastern Asia's politics and culture.
The authors encourage readers to confront the imperial pattern in U.S. history with implications for today's Middle Eastern conflicts. They also offer a deeper understanding of China's rise and Asia's place in today's world.

For instructors: An Online Instructor's Manual is available, with teaching tips for using Arc of Empire in graduate and undergraduate courses on America's wars in Asia. It includes lecture topics, chronologies, and sample discussion questions. 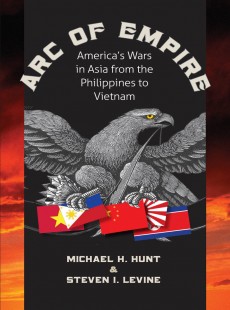 America's Wars in Asia from the Philippines to Vietnam