Since its inception, the U.S.-Mexico border has invited the creation of cultural, economic, and political networks that often function in defiance of surrounding nation-states. It has also produced individual and group identities that are as subversive as they are dynamic. In Are We Not Foreigners Here?, Jeffrey M. Schulze explores how the U.S.-Mexico border shaped the concepts of nationhood and survival strategies of three Indigenous tribes who live in this borderland: the Yaqui, Kickapoo, and Tohono O'odham. These tribes have historically fought against nation-state interference, employing strategies that draw on their transnational orientation to survive and thrive.

Schulze details the complexities of the tribes' claims to nationhood in the context of the border from the nineteenth century to the present. He shows that in spreading themselves across two powerful, omnipresent nation-states, these tribes managed to maintain separation from currents of federal Indian policy in both countries; at the same time, it could also leave them culturally and politically vulnerable, especially as surrounding powers stepped up their efforts to control transborder traffic. Schulze underlines these tribes' efforts to reconcile their commitment to preserving their identities, asserting their nationhood, and creating transnational links of resistance with an increasingly formidable international boundary. 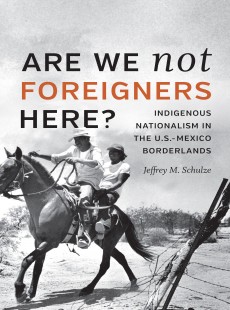 Are We Not Foreigners Here?

Indigenous Nationalism in the U.S.-Mexico Borderlands