As the sectional crisis gripped the United States, the rancor increasingly spread to the halls of Congress. Preston Brooks's frenzied assault on Charles Sumner was perhaps the most notorious evidence of the dangerous divide between proslavery Democrats and the new antislavery Republican Party. But as disunion loomed, rifts within the majority Democratic Party were every bit as consequential. And nowhere was the fracture more apparent than in the raging debates between Illinois's Stephen Douglas and Mississippi's Jefferson Davis. As leaders of the Democrats' northern and southern factions before the Civil War, their passionate conflict of words and ideas has been overshadowed by their opposition to Abraham Lincoln. But here, weaving together biography and political history, Michael E. Woods restores Davis and Douglas's fatefully entwined lives and careers to the center of the Civil War era.

Operating on personal, partisan, and national levels, Woods traces the deep roots of Democrats' internal strife, with fault lines drawn around fundamental questions of property rights and majority rule. Neither belief in white supremacy nor expansionist zeal could reconcile Douglas and Davis's factions as their constituents formed their own lines in the proverbial soil of westward expansion. The first major reinterpretation of the Democratic Party's internal schism in more than a generation, Arguing until Doomsday shows how two leading antebellum politicians ultimately shattered their party and hastened the coming of the Civil War. 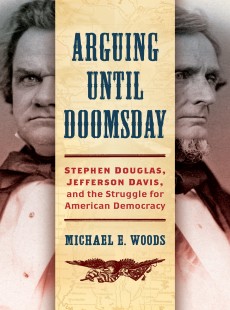 Stephen Douglas, Jefferson Davis, and the Struggle for American Democracy