Following the American Revolution, it was a cliche that the new republic's future depended on widespread, informed citizenship. However, instead of immediately creating the common schools--accessible, elementary education--that seemed necessary to create such a citizenry, the Federalists in power founded one of the most ubiquitous but forgotten institutions of early American life: academies, privately run but state-chartered secondary schools that offered European-style education primarily for elites. By 1800, academies had become the most widely incorporated institutions besides churches and transportation projects in nearly every state.

In this book, Mark Boonshoft shows how many Americans saw the academy as a caricature of aristocratic European education and how their political reaction against the academy led to a first era of school reform in the United States, helping transform education from a tool of elite privilege into a key component of self-government. And yet the very anti-aristocratic critique that propelled democratic education was conspicuously silent on the persistence of racial and gender inequality in public schooling. By tracing the history of academies in the revolutionary era, Boonshoft offers a new understanding of political power and the origins of public education and segregation in the United States. 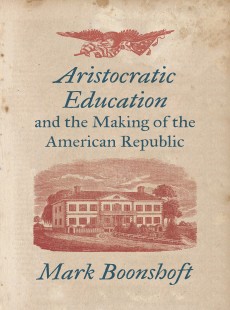 Aristocratic Education and the Making of the American Republic