The dangerous, decades-long arms race between the United States and the Soviet Union during the Cold War begged a fundamental question: how did these superpowers actually plan to survive a nuclear strike? In Armageddon Insurance, the first historical account of Soviet civil defense and a pioneering reappraisal of its American counterpart, Edward M. Geist compares how the two superpowers tried, and mostly failed, to reinforce their societies to withstand the ultimate catastrophe.

Drawing on previously unexamined documents from archives in America, Russia, and Ukraine, Geist places these civil defense programs in their political and cultural contexts, demonstrating how each country's efforts reflected its cultural preoccupations and blind spots and revealing how American and Soviet civil defense related to profound issues of nuclear strategy and national values. This work challenges prevailing historical assumptions and unearths the ways Moscow and Washington developed nuclear weapons policies based not on rational strategic or technical considerations but in power struggles between different institutions pursuing their own narrow self-interests. 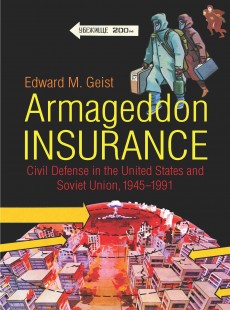