In this important study, Chester Pach traces the emergence of military assistance as a major instrument of contemporary American foreign policy. During the early Cold War, arms aid grew from a few country and regional programs into a worldwide effort with an annual cost of more than $1 billion. Pach analyzes the Truman administration's increasing reliance on arms aid--for Latin America, Greece and Turkey, China, and Western Europe--to contain Communist expansion during the late 1940s. He shows that a crucial event was the passage of the Mutual Defense Assistance Act of 1949, the progenitor of a long series of global, Cold War arms measures.

Pach demonstrates that the main impetus for the startling growth of military assistance was a belief that it would provide critical political and psychological reassurance to friendly nations. Although this aid was ostensibly provided for military purposes, the overriding goals were insuring goodwill, raising foreign morale, stiffening the will to resist communism, and proving American resolve and reliability.

Policymakers, Pach contends, confused means with ends by stressing the symbolic importance of furnishing aid. They sought additional appropriations with the threat that any diminution or cessation of aid suggested a weakening of American commitment. Pach reveals that civilian, not military, officials were the principal advocates of the expansion of military aid, and he shows how the policies established during the Truman administration continued to exert a profound influence throughout the Cold War.

Some officials questioned the self-perpetuating qualities of military aid programs, but Pach concludes that their warnings went unheeded. Although fiscal restraints in the Truman administration temporarily stemmed the growth of aid, the Korean War exploded budgetary limitations. MIlitary assistance spending expanded rapidly in size and scope, gaining a momentum that succeeding administrations could not resist. 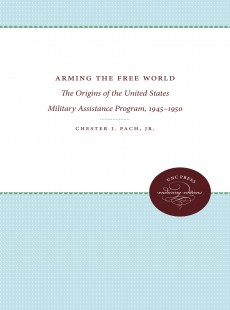 The Origins of the United States Military Assistance Program, 1945-1950