From 1933 to 1945, the Reich Chamber of Culture exercised a profound influence over hundreds of thousands of German artists and entertainers. Alan Steinweis focuses on the fields of music, theater, and the visual arts in this first major study of Nazi cultural administration, examining a complex pattern of interaction among leading Nazi figures, German cultural functionaries, ordinary artists, and consumers of culture. Steinweis gives special attention to Nazi efforts to purge the arts of Jews and other so-called undesirables.
Steinweis describes the political, professional, and economic environment in which German artists were compelled to function and explains the structure of decision making, thus showing in whose interest cultural policies were formulated. He discusses such issues as insurance, minimum wage statutes, and certification guidelines, all of which were matters of high priority to the art professions before 1933 as well as after the Nazi seizure of power. By elucidating the economic and professional context of cultural life, Steinweis helps to explain the widespread acquiescence of German artists to artistic censorship and racial 'purification.' His work also sheds new light on the purge of Jews from German cultural life. 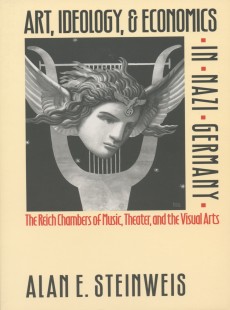 The Reich Chambers of Music, Theater, and the Visual Arts