As Long as the Earth Endures is an annotated collection of almost all of the known Native texts in Miami-Illinois, an Algonquian language of Indiana, Illinois, and Oklahoma. These texts, gathered from native speakers of Myaamia, Peoria, and Wea in the 1890s and the early twentieth century, span several genres, such as culture hero stories, trickster tales, animal stories, personal and historical narratives, how-to stories, and translations of Christian materials. These texts were collected from seven speakers: Frank Beaver, George Finley, Gabriel Godfroy, William Peconga, Thomas Richardville, Elizabeth Valley, and Sarah Wadsworth. Representing thirty years of study, almost all of the stories are published here for the first time. The texts are presented with their original transcriptions along with full, corrected modern transcriptions, translations, and grammatical analyses. Included with the texts are extensive annotation on all aspects of their meaning, pronunciation, and interpretation; a lengthy glossary explaining and analyzing in detail every word; and an introduction placing the texts in their philological, historical, linguistic, and folkloric context, with a discussion of how the stories compare to similar texts from neighboring Great Lakes Algonquian tribes. 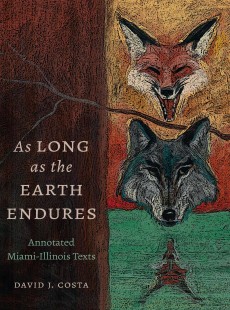 As Long as the Earth Endures