Don't Ask, Don't Tell" was the directive of President Clinton's 1993 military policy regarding gay and lesbian soldiers. This official silence continued a collective amnesia about the patriotic service and courageous sacrifices of homosexual troops. Ask and Tell recovers these lost voices, offering a rich chronicle of the history of gay and lesbian service in the U.S. military from World War II to the Iraq War.

Drawing on more than 50 interviews with gay and lesbian veterans, Steve Estes charts the evolution of policy toward homosexuals in the military over the past 65 years, uncovering the ways that silence about sexuality and military service has affected the identities of gay veterans. These veteran voices--harrowing, heroic, and on the record--reveal the extraordinary stories of ordinary Americans, men and women who simply did their duty and served their country in the face of homophobia, prejudice, and enemy fire. Far from undermining national security, unit cohesion, or troop morale, Estes demonstrates, these veterans strengthened the U.S. military in times of war and peace. He also examines challenges to the ban on homosexual service, placing them in the context of the wider movement for gay rights and gay liberation. Ask and Tell is an important compilation of unheard voices, offering Americans a new understanding of the value of all the men and women who serve and protect them. 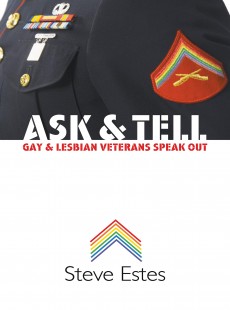 Gay and Lesbian Veterans Speak Out