Assimilation, Resilience, and Survival illustrates how settler colonialism propelled U.S. government programs designed to assimilate generations of Native children at the Stewart Indian School (1890–1980). The school opened in Carson City, Nevada, in 1890 and embraced its mission to destroy the connections between Native children and their lands, isolate them from their families, and divorce them from their cultures and traditions. Newly enrolled students were separated from their families, had their appearances altered, and were forced to speak only English. However, as Samantha M. Williams uncovers, numerous Indigenous students and their families subverted school rules, and tensions arose between federal officials and the local authorities charged with implementing boarding school policies. The first book on the history of the Stewart Indian School, Assimilation, Resilience, and Survival reveals the experiences of generations of Stewart School alumni and their families, often in their own words. Williams demonstrates how Indigenous experiences at the school changed over time and connects these changes with Native American activism and variations in federal policy. Williams's research uncovers numerous instances of abuse at Stewart, and Assimilation, Resilience, and Survival addresses both the trauma of the boarding school experience and the resilience of generations of students who persevered there under the most challenging of circumstances. 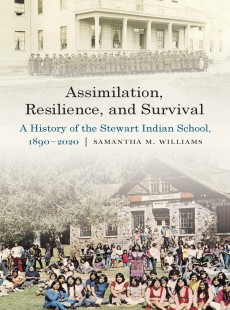