Why did eleven slave states secede from the Union in 1860-61? Why did the eighteen free states loyal to the Union deny the legitimacy of secession, and take concrete steps after Fort Sumter to subdue what President Abraham Lincoln deemed treasonous rebellion?

At the Precipice seeks to answer these and related questions by focusing on the different ways in which Americans, North and South, black and white, understood their interests, rights, and honor during the late antebellum years. Rather than give a narrative account of the crisis, Shearer Davis Bowman takes readers into the minds of the leading actors, examining the lives and thoughts of such key figures as Abraham Lincoln, James Buchanan, Jefferson Davis, John Tyler, and Martin Van Buren. Bowman also provides an especially vivid glimpse into what less famous men and women in both sections thought about themselves and the political, social, and cultural worlds in which they lived, and how their thoughts informed their actions in the secession period. Intriguingly, secessionists and Unionists alike glorified the Declaration of Independence and the Constitution of the United States, yet they interpreted those sacred documents in markedly different ways and held very different notions of what constituted "American" values. 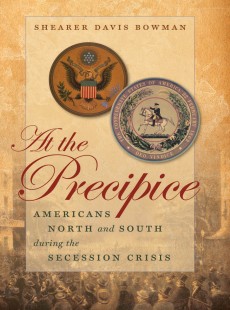 Americans North and South during the Secession Crisis