From the earliest days of European settlement in the South, as in many rural economies around the globe, cured pork became a main source of sustenance, and the cheaper, lower-on-the-hog cuts--notably, bacon--became some of the most important traditional southern foodstuffs. In this cookbook, Fred Thompson captures a humble ingredient's regional culinary history and outsized contributions to the table. Delicious, of course, straight out of the skillet, bacon is also special in its ability to lend a unique savory smokiness to an enormous range of other foods.

Today, for regular eaters and high-flying southern chefs alike, bacon has achieved a culinary profile so popular as to approach baconmania. But Thompson sagely notes that bacon will survive the silliness. Describing the many kinds of bacon that are available, Thompson provides key choices for cooking and seasoning appropriately. The book's fifty-six recipes invariably highlight and maximize that beloved bacon factor, so appreciated throughout the South and beyond (by Thompson's count, fifty different styles of bacon exist worldwide). Dishes range from southern regional to international, from appetizers to main courses, and even to a very southern beverage. Also included are Thompson's do-it-yourself recipes for making bacon from fresh pork belly in five different styles. 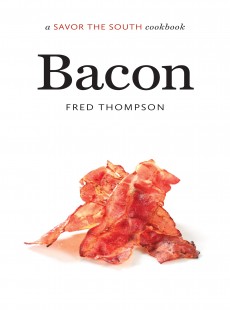