In November 1934 as the United States and Japan drifted toward war, a team of American League all-stars that included Babe Ruth, Lou Gehrig, Jimmie Foxx, future secret agent Moe Berg, and Connie Mack barnstormed across the Land of the Rising Sun. Hundreds of thousands of fans, many waving Japanese and American flags, welcomed the team with shouts of “Banzai! Banzai, Babe Ruth!” The all-stars stayed for a month, playing 18 games, spawning professional baseball in Japan, and spreading goodwill. Politicians on both sides of the Pacific hoped that the amity generated by the tour—and the two nations’ shared love of the game—could help heal their growing political differences. But the Babe and baseball could not overcome Japan’s growing nationalism, as a bloody coup d’état by young army officers and an assassination attempt by the ultranationalist War Gods Society jeopardized the tour’s success. A tale of international intrigue, espionage, attempted murder, and, of course, baseball, Banzai Babe Ruth is the first detailed account of the doomed attempt to reconcile the United States and Japan through the 1934 All American baseball tour. Robert K. Fitts provides a wonderful story about baseball, nationalism, and American and Japanese cultural history. 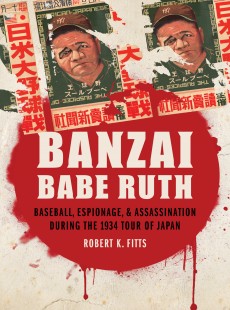 Baseball, Espionage, and Assassination during the 1934 Tour of Japan