In this concise history of expropriation of land for the common good in Europe and North America from medieval times to 1800, Susan Reynolds contextualizes the history of an important legal doctrine regarding the relationship between government and the institution of private property.

Before Eminent Domain concentrates on western Europe and the English colonies in America. As Reynolds argues, expropriation was a common legal practice in many societies in which individuals had rights to land. It was generally accepted that land could be taken from them, with compensation, when the community, however defined, needed it. She cites examples of the practice since the early Middle Ages in England, France, Germany, Italy, and Spain, and from the seventeenth century in America.

Reynolds concludes with a discussion of past and present ideas and assumptions about community, individual rights, and individual property that underlie the practice of expropriation but have been largely ignored by historians of both political and legal thought. 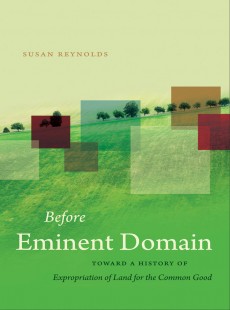 Toward a History of Expropriation of Land for the Common Good