War destroys, but it also inspires, stimulates, and creates. It is, in this way, a muse, and a powerful one at that. The American Civil War was a particularly prolific muse--unleashing with its violent realities a torrent of language, from soldiers' intimate letters and diaries to everyday newspaper accounts, great speeches, and enduring literary works. In Belligerent Muse, Stephen Cushman considers the Civil War writings of five of the most significant and best known narrators of the conflict: Abraham Lincoln, Walt Whitman, William Tecumseh Sherman, Ambrose Bierce, and Joshua Lawrence Chamberlain. Considering their writings both as literary expressions and as efforts to record the rigors of the war, Cushman analyzes their narratives and the aesthetics underlying them to offer a richer understanding of how Civil War writing chronicled the events of the conflict as they unfolded and then served to frame the memory of the war afterward.

Elegantly interweaving military and literary history, Cushman uses some of the war's most famous writers and their works to explore the profound ways in which our nation's great conflict not only changed the lives of its combatants and chroniclers but also fundamentally transformed American letters. 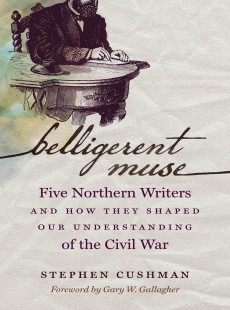