The "Young American" critics -- Randolph Bourne, Van Wyck Brooks, Waldo Frank, and Lewis Mumford -- are well known as central figures in the Greenwich Village "Little Renaissance" of the 1910s and in the postwar debates about American culture and politics. In Beloved Community, Casey Blake considers these intellectuals as a coherant group and assesses the connection between thier cultural criticisms and their attempts to forge a communitarian alternative to liberal and socialist poitics.

Blake draws on biography to emphasize the intersection of questions of self, culture, and society in their calls for a culture of "personality" and "self-fulfillment." In contrast to the tendency of previous analyses to separate these critics' cultural and autobiographical writings from their politics, Blake argues that their cultural criticism grew out of a radical vision of self-realization through participation in a democratic culture and polity. He also examines the Young American writers' interpretations of such turn-of-the-century radicals as William Morris, Henry George, John Dewey, and Patrick Geddes and shows that this adversary tradition still offers important insights into contemporary issues in American politics and culture.

Beloved Community reestablishes the democratic content of the Young Americans' ideal of "personality" and argues against viewing a monolithic therapeutic culture as the sole successor to a Victorian "culture of character." The politics of selfhood that was so critical to the Young Americans' project has remained a contested terrain throughout the twentieth century. 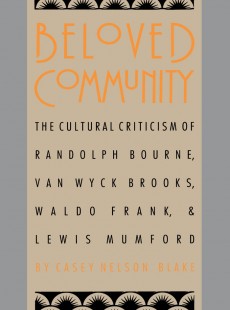