On the eve of the Civil War, most people of color in the United States toiled in bondage. Yet nearly half a million of these individuals, including over 250,000 in the South, were free. In Beyond Slavery's Shadow, Warren Eugene Milteer Jr. draws from a wide array of sources to demonstrate that from the colonial period through the Civil War, the growing influence of white supremacy and proslavery extremism created serious challenges for free persons categorized as "negroes," "mulattoes," "mustees," "Indians," or simply "free people of color" in the South. Segregation, exclusion, disfranchisement, and discriminatory punishment were ingrained in their collective experiences. Nevertheless, in the face of attempts to deny them the most basic privileges and rights, free people of color defended their families and established organizations and businesses.

These people were both privileged and victimized, both celebrated and despised, in a region characterized by social inconsistency. Milteer's analysis of the way wealth, gender, and occupation intersected with ideas promoting white supremacy and discrimination reveals a wide range of social interactions and life outcomes for the South's free people of color and helps to explain societal contradictions that continue to appear in the modern United States. 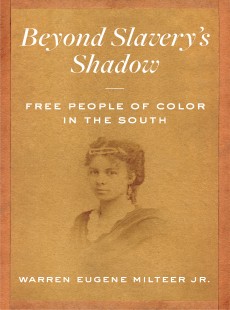 Free People of Color in the South