Bittersweet Legacy is the dramatic story of the relationship between two generations of black and white southerners in Charlotte, North Carolina, from 1850 to 1910. Janette Greenwood describes the interactions between black and white business and professional people--the 'better classes,' as they called themselves. Her book paints a surprisingly complex portrait of race and class relations in the New South and demonstrates the impact of personal relationships, generational shifts, and the interplay of local, state, and national events in shaping the responses of black and white southerners to each other and the world around them. Greenwood argues that concepts of race and class changed significantly in the late nineteenth century. Documenting the rise of interracial social reform movements in the 1880s, she suggests that the 'better classes' briefly created an alternative vision of race relations. The disintegration of the alliance as a result of New South politics and a generational shift in leadership left a bittersweet legacy for Charlotte that would weigh heavily on its citizens well into the twentieth century. 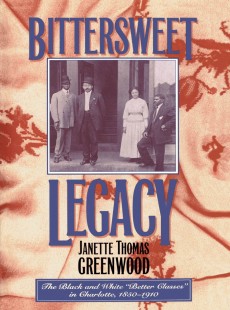