In 1717, the notorious pirate Blackbeard captured a French slaving vessel off the coast of Martinique and made it his flagship, renaming it Queen Anne's Revenge. Over the next six months, the heavily armed ship and its crew captured all manner of riches from merchant ships sailing the Caribbean to the Carolinas. But in June 1718, with British authorities closing in, Blackbeard reportedly ran Queen Anne's Revenge aground just off the coast of what is now North Carolina's Fort Macon State Park. What went down with the ship remained hidden for centuries, as the legend of Blackbeard continued to swell in the public's imagination. When divers finally discovered the wreck in 1996, it was immediately heralded as a major find in both maritime archaeology and the history of piracy in the Atlantic. Now the story of Queen Anne's Revenge and its fearsome captain is revealed in full detail.

Having played vital roles in the shipwreck's recovery and interpretation, Mark U. Wilde-Ramsing and Linda F. Carnes-McNaughton vividly reveal in words and images the ship's first use as a French privateer and slave ship, its capture and use by Blackbeard's armada, the circumstances of its sinking, and all that can be known about life as an eighteenth-century pirate based on a wealth of artifacts now raised from the ocean floor. 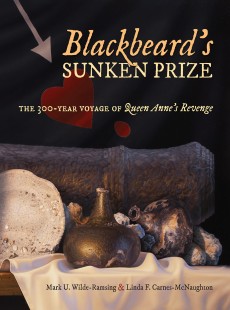