More than a million tourists visit religious landmarks in San Antonio, Texas, each year, observing and sometimes participating in religious activities there. The San Antonio Missions National Historical Park--managed by the National Park Service, in cooperation with the Catholic Church--is one of hundreds of religious places in America and around the world where tourists have become a familiar presence. In Blessed with Tourists, Thomas S. Bremer explores the intersection of tourism and commerce with religion in American, using the missions and other San Antonio sites as prime examples.

Bremer recounts the history of San Antonio, from its Native American roots to its development as a religious center with the growth of the Spanish colonial missions, to the modern transformation of San Antonio into a tourist destination. Employing both ethnographic and historical approaches, Bremer examines the concepts of place, identity, aesthetics, and commercialization, demonstrating numerous ways that modern market forces affect religious communities. By identifying important connections between religious and touristic practices, Bremer establishes San Antonio as a distinctive source for anyone seeking to understand the interplay between the religious and the secular, the traditional and the modern. 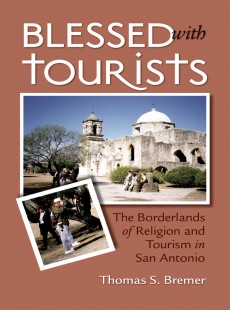 The Borderlands of Religion and Tourism in San Antonio