In March 1968, thousands of Chicano students walked out of their East Los Angeles high schools and middle schools to protest decades of inferior and discriminatory education in the so-called "Mexican Schools." During these historic walkouts, or "blowouts," the students were led by Sal Castro, a courageous and charismatic Mexican American teacher who encouraged the students to make their grievances public after school administrators and school board members failed to listen to them. The resulting blowouts sparked the beginning of the urban Chicano Movement of the late 1960s and early 1970s, the largest and most widespread civil rights protests by Mexican Americans in U.S. history.

This fascinating testimonio, or oral history, transcribed and presented in Castro's voice by historian Mario T. Garcia, is a compelling, highly readable narrative of a young boy growing up in Los Angeles who made history by his leadership in the blowouts and in his career as a dedicated and committed teacher. Blowout! fills a major void in the history of the civil rights and Chicano movements of the 1960s, particularly the struggle for educational justice. 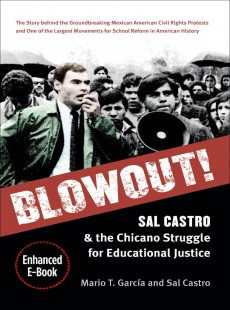 Sal Castro and the Chicano Struggle for Educational Justice