The history of race in North America is still often conceived of in black and white terms. In this book, A. B. Wilkinson complicates that history by investigating how people of mixed African, European, and Native American heritage—commonly referred to as "Mulattoes," "Mustees," and "mixed bloods"—were integral to the construction of colonial racial ideologies. Thousands of mixed-heritage people appear in the records of English colonies, largely in the Chesapeake, Carolinas, and Caribbean, and this book provides a clear and compelling picture of their lives before the advent of the so-called one-drop rule. Wilkinson explores the ways mixed-heritage people viewed themselves and explains how they—along with their African and Indigenous American forebears—resisted the formation of a rigid racial order and fought for freedom in seventeenth- and eighteenth-century societies shaped by colonial labor and legal systems.

As contemporary U.S. society continues to grapple with institutional racism rooted in a settler colonial past, this book illuminates the earliest ideas of racial mixture in British America well before the founding of the United States. 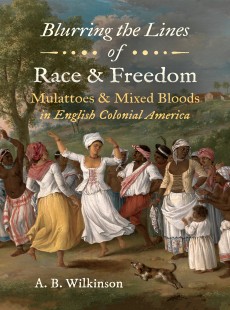 Blurring the Lines of Race and Freedom