In Borderline Citizen Robin Hemley wrestles with what it means to be a citizen of the world, taking readers on a singular journey through the hinterlands of national identity. As a polygamist of place, Hemley celebrates Guy Fawkes Day in the contested Falkland Islands; Canada Day and the Fourth of July in the tiny U.S. exclave of Point Roberts, Washington; Russian Federation Day in the Russian exclave of Kaliningrad; Handover Day among protesters in Hong Kong; and India Day along the most complicated border in the world. Forgoing the exotic descriptions of faraway lands common in traditional travel writing, Borderline Citizen upends the genre with darkly humorous and deeply compassionate glimpses into the lives of exiles, nationalists, refugees, and others. Hemley's superbly rendered narratives detail these individuals, including a Chinese billionaire who could live anywhere but has chosen to situate his ornate mansion in the middle of his impoverished ancestral village, a black nationalist wanted on thirty-two outstanding FBI warrants exiled in Cuba, and an Afghan refugee whose intentionally altered birth date makes him more easy to deport despite his harrowing past. Part travelogue, part memoir, part reportage, Borderline Citizen redefines notions of nationhood through an exploration of the arbitrariness of boundaries and what it means to belong. 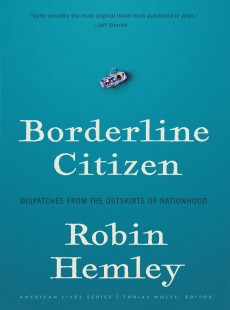 Dispatches from the Outskirts of Nationhood