Henry King Burgwyn, Jr. (1841-63), one of the youngest colonels in the Confederate Army, died at the age of twenty-one while leading the twenty-sixth North Carolina regiment into action at the battle of Gettysburg. In this sensitive biography, originally published by UNC Press in 1985, Archie Davis provides a revealing portrait of the young man's character and a striking example of a soldier who selflessly fulfilled his duty. Drawing on Burgwyn's own letters and diary, Davis also offers a fascinating glimpse into North Carolina society during the antebellum period and the Civil War. 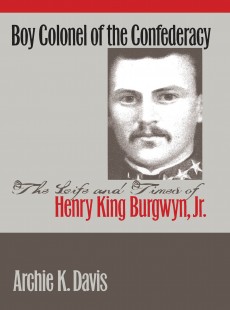 Boy Colonel of the Confederacy

The Life and Times of Henry King Burgwyn, Jr.