As a leading Confederate general, Braxton Bragg (1817–1876) earned a reputation for incompetence, for wantonly shooting his own soldiers, and for losing battles. This public image established him not only as a scapegoat for the South's military failures but also as the chief whipping boy of the Confederacy. The strongly negative opinions of Bragg's contemporaries have continued to color assessments of the general's military career and character by generations of historians. Rather than take these assessments at face value, Earl J. Hess's biography offers a much more balanced account of Bragg, the man and the officer.

While Hess analyzes Bragg's many campaigns and battles, he also emphasizes how his contemporaries viewed his successes and failures and how these reactions affected Bragg both personally and professionally. The testimony and opinions of other members of the Confederate army--including Bragg's superiors, his fellow generals, and his subordinates--reveal how the general became a symbol for the larger military failures that undid the Confederacy. By connecting the general's personal life to his military career, Hess positions Bragg as a figure saddled with unwarranted infamy and humanizes him as a flawed yet misunderstood figure in Civil War history. 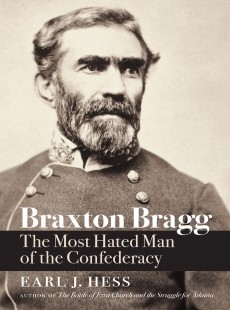 The Most Hated Man of the Confederacy