A native New Englander, chef Bruce Moffett fell in love with the South. Founding chef of three Charlotte restaurants—Barrington's, Good Food on Montford, and Stagioni—Moffett is known for creating dishes inspired by both New England and southern culinary traditions. With the simple, compelling aim of making people happy through his cooking, the chef builds immense flavors in every morsel he prepares and serves—and in this lavishly illustrated cookbook he shows you how to do the same.

From small plates of Pickled Butternut Squash Ribbons to Creamy Spring Onion Soup, the meal you make will start out beautifully. Recipes provide step-by-step directions for cooking entire composed dinners, from Pecan-Crusted Lamb with Chipotle BBQ Sauce and Sweet Potatoes to Swordfish with Summer Succotash. Among the book's 120 recipes are irresistible soups, salads, pizza, pasta, vegetable dishes, breads, and desserts. When he arrived in Charlotte almost twenty years ago, Moffett became one of the first chefs there to establish creative, long-term relationships with local farms and purveyors. In his book, written with Keia Mastrianni, he shines a spotlight on the North Carolina producers who provide many of the beautiful ingredients featured daily in his restaurants. 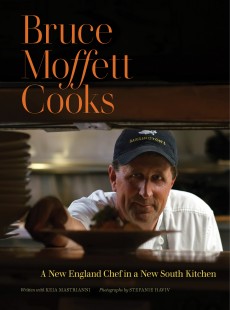 A New England Chef in a New South Kitchen