The town of Skagway was born in 1897 after its population quintupled in under a year due to the Klondike gold rush. Balanced on the edge of anarchy, the U.S. Army stationed Company L, a unit of Buffalo Soldiers, there near the end of the gold rush. Buffalo Soldiers in Alaska tells the story of these African American soldiers who kept the peace during a volatile period in America's resource-rich North. It is a fascinating tale that features white officers and Black soldiers safeguarding U.S. territory, supporting the civil authorities, protecting Native Americans, fighting natural disasters, and serving proudly in America's last frontier. Despite the discipline and contributions of soldiers who served honorably, Skagway exhibited the era's persistent racism and maintained a clear color line. However, these Black Regulars carried out their complex and sometimes contradictory mission with a combination of professionalism and restraint that earned the grudging respect of the independently minded citizens of Alaska. The company used the popular sport of baseball to connect with the white citizens of Skagway and in the process gained some measure of acceptance. Though the soldiers left little trace in Skagway, a few remained after their enlistments and achieved success and recognition after settling in other parts of Alaska. 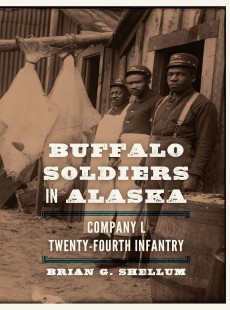