In this study of British middle-class feminism in the late nineteenth and early twentieth centuries, Antoinette Burton explores an important but neglected historical dimension of the relationship between feminism and imperialism. Demonstrating how feminists in the United Kingdom appropriated imperialistic ideology and rhetoric to justify their own right to equality, she reveals a variety of feminisms grounded in notions of moral and racial superiority. According to Burton, Victorian and Edwardian feminists such as Josephine Butler, Millicent Garrett Fawcett, and Mary Carpenter believed that the native women of colonial India constituted a special 'white woman's burden.' Although there were a number of prominent Indian women in Britain as well as in India working toward some of the same goals of equality, British feminists relied on images of an enslaved and primitive 'Oriental womanhood' in need of liberation at the hands of their emancipated British 'sisters.' Burton argues that this unquestioning acceptance of Britain's imperial status and of Anglo-Saxon racial superiority created a set of imperial feminist ideologies, the legacy of which must be recognized and understood by contemporary feminists. 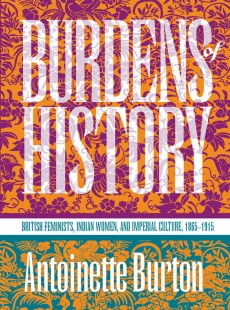