Birmingham served as the stage for some of the most dramatic and important moments in the history of the civil rights struggle. In this vivid narrative account, Glenn Eskew traces the evolution of nonviolent protest in the city, focusing particularly on the sometimes problematic intersection of the local and national movements.

Eskew describes the changing face of Birmingham's civil rights campaign, from the politics of accommodation practiced by the city's black bourgeoisie in the 1950s to local pastor Fred L. Shuttlesworth's groundbreaking use of nonviolent direct action to challenge segregation during the late 1950s and early 1960s.

In 1963, the national movement, in the person of Martin Luther King Jr., turned to Birmingham. The national uproar that followed on Police Commissioner Bull Connor's use of dogs and fire hoses against the demonstrators provided the impetus behind passage of the watershed Civil Rights Act of 1964.

Paradoxically, though, the larger victory won in the streets of Birmingham did little for many of the city's black citizens, argues Eskew. The cancellation of protest marches before any clear-cut gains had been made left Shuttlesworth feeling betrayed even as King claimed a personal victory. While African Americans were admitted to the leadership of the city, the way power was exercised--and for whom--remained fundamentally unchanged. 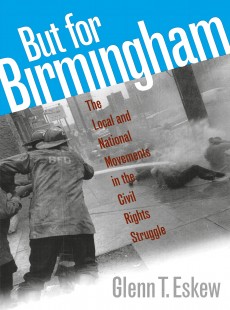 The Local and National Movements in the Civil Rights Struggle