Buzzie and the Bull chronicles a baseball year in the lives of two lifelong friends who couldn't be more different: Buzzie Bavasi, the legendary general manager of the Brooklyn and Los Angeles Dodgers, and Al "the Bull" Ferrara, bon vivant, fountain of joy, and bench player. Their 1965 baseball journey encompassed a thrilling pennant race settled on the final day of the season, a city engulfed in flames, a perfect game, and a GM who extolled his friend the Bull as a hero in May and then banished him from the team to the depths of public purgatory in July. The partnership of these two characters—the general manager who valued fearlessness above all else and the crazy player who loved living on the edge—became the embodiment of champions who never choked in the clutch. Over seventeen years, Bavasi's teams won eight pennants and four World Series titles. His approach deserves review, and his friendship with Ferrara illustrates the ground on which he staked his baseball career. The summer of 1965 proved Bavasi's thesis that champions are built on players with one core characteristic: nerves of steel.Buzzie and the Bull offers a counterpoint to today's focus on advanced statistical analysis that may be crowding out the important work of discovering a player's unique human qualities: the intangibles. Gauge those intangibles correctly and you get an edge—and edges help win championships. 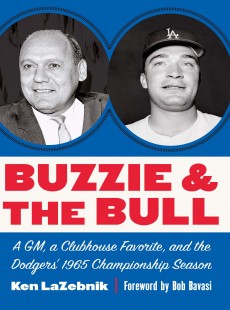 Buzzie and the Bull

A GM, a Clubhouse Favorite, and the Dodgers' 1965 Championship Season