In 1928 New York native Muriel Earley Sheppard moved with her mining engineer husband to the Toe River Valley -- an isolated pocket in North Carolina between the Blue Ridge and Iron Mountains. Sheppard began visiting her neighbors and forming friendships in remote coves and rocky clearings, and in 1935 her account of life in the mountains -- Cabins in the Laurel -- was published. The book included 128 striking photographs by the well-known Chapel Hill photographer, Bayard Wootten, a frequent visitor to the area.

The early reviews of Cabins in the Laurel were overwhelmingly positive, but the mountain people -- Sheppard's friends and subjects -- initially felt that she had portrayed them as too old-fashioned, even backward. As novelist John Ehle shows in his foreword, though, fifty years have made a huge difference, and the people of the Toe River Valley have been among its most affectionate readers.

This new large-format edition, which makes use of many of Wootten's original negatives, will introduce Sheppard's words and Wootten's photography to a whole new generation of readers -- in the Valley and beyond. 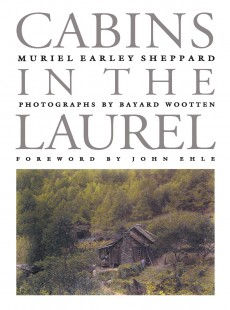 Cabins in the Laurel