Tired of an unfulfilling life in Kansas City, Missouri, Patrick Dobson left his job and set off on foot across the Great Plains. After two and a half months, 1,450 miles, and numerous encounters with the people of the heartland, Dobson arrived in Helena, Montana. He then set a canoe on the Missouri and asked the river to carry him safely back to Kansas City, hoping this enigmatic watercourse would help reconnect him with his life.   In Canoeing the Great Plains, Dobson recounts his journey on the Missouri, the country’s longest river. Dobson, a novice canoeist when he begins his trip, faces the Missouri at a time of dangerous flooding and must learn to trust himself to the powerful flows of the river and its stark and serenely beautiful countryside. He meets a cast of characters along the river who assist him both with the mundane tasks of canoeing—portaging around dams and reservoirs and finding campsites—and with his own personal transformation. Mishaps, mistakes, and misadventures plague his trip, but over time the river shifts from being a frightening adversary to a welcome companion.   As the miles float by and the distinctions blur between himself and what he formerly called nature, Dobson comes to grips with his past, his fears, and his life beyond the river. 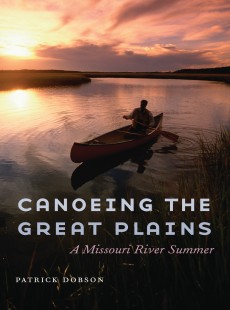