Combining Atlantic and imperial perspectives, Caribbean New Orleans offers a lively portrait of the city and a probing investigation of the French colonists who established racial slavery there as well as the African slaves who were forced to toil for them. Casting early New Orleans as a Caribbean outpost of the French Empire rather than as a North American frontier town, Cécile Vidal reveals the persistent influence of the Antilles, especially Saint-Domingue, which shaped the city's development through the eighteenth century. In so doing, she urges us to rethink our usual divisions of racial systems into mainland and Caribbean categories.

Drawing on New Orleans's rich court records as a way to capture the words and actions of its inhabitants, Vidal takes us into the city's streets, market, taverns, church, hospitals, barracks, and households. She explores the challenges that slow economic development, Native American proximity, imperial rivalry, and the urban environment posed to a social order that was predicated on slave labor and racial hierarchy. White domination, Vidal demonstrates, was woven into the fabric of New Orleans from its founding. This comprehensive history of urban slavery locates Louisiana's capital on a spectrum of slave societies that stretched across the Americas and provides a magisterial overview of racial discourses and practices during the formative years of North America's most intriguing city. 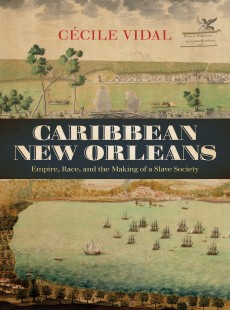 Empire, Race, and the Making of a Slave Society