Cartography describes Katherine Schifani's time deployed in Iraq as a counterterrorism advisor with U.S. Special Forces in 2011. It is the story of one woman mapping the terra incognita of Iraq with questionable interpreters, nonexistent guidance, and an unclear purpose. It's the story of a gay woman serving under the military's Don't Ask, Don't Tell policy who realizes that the policy repeal she has long awaited is so overshadowed by a hostile environment that remaining closeted is more critical than ever. At the heart of Cartography is Schifani's quest to understand the Iraqi landscape and the Special Forces culture of American men she worked alongside as a gay woman and a member of the air force. Her memoir examines both the perils of being undertrained and underequipped to perform the job assigned to her in her role as an advisor and some of the unique situations—good and bad—her gender created in such an irregular combat environment. Schifani's deployment was an exercise in exploration, observation, and navigating a wholly foreign land. 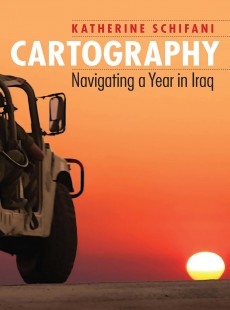 Navigating a Year in Iraq